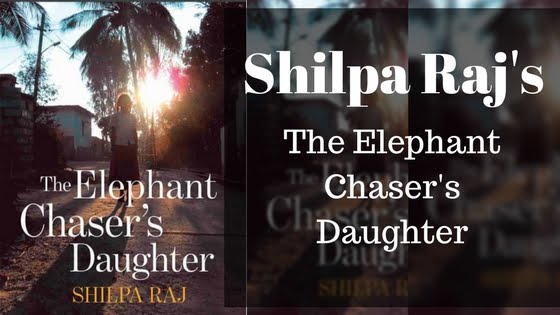 Shilpa Raj's The Elephant Chaser's Daughter is a book to be appreciated for many reasons. I am not a big fan of the books which are devoid of the sense of imagery and track on the road of realism without being soothing with the cushion of fiction. Having said that, however, The Elephant Chaser's Daughter is another book which did not comply with my theory but it failed my theory too! The book had much to offer and it surely stands apart as many notable book critics have written in their reviews for Shilpa's debut book, a memoir. Shilpa has written this book in about 7 years and she has been linking the dots - her family, her individual life, her education, her experiences, her struggle, the darker secrets, the mean social realities and so on... the book compels you to think and the subject to be thought, believe me and other readers, are grave!

Shilpa Raj has divided the book into several chapters and all her chapters reveal a chunk of her life not only from the day she could understand what memory is but from the days even before she was born! The life of a person who is born into a Dalit family is all set to follow a predictable pattern. No education, no mainstream life, no facilities, just go on and live on... and being a girl, most of the times, becomes tough in those circumstances. Shilpa wasn't meant to be but her grandmother saved her life.

The book is a story of the girl who braved all the odds and kept fighting. Today, you see Shilpa as an author and a post graduate, a successful person. In her memoir, she draws the attention of the readers towards the importance of education in one's life. And Shanti Bhavan features in The Elephant Chaser's Daughter in shining colours because it was the place where Shilpa and many others like her attained their education and a new life which was far away from the lacking reality of the poor people in the society where Shilpa belongs to.

The Elephant Chaser's Daughter attracts the attention of the society towards the grim realities, serious problems which we still have among us. Discrimination, negligence, apathy, alienation... in the 21st century, we still find it difficult to recognise other persons just because they belong to the part of the city which is in perennial want of things. Can we believe it? Other problems that Shilpa Raj hints at in her memoir are of male domination in conjugal life, child marriage (especially girl children), administration's apathy towards the social issues of people belonging to the 'lower section' and women safety.

For those readers who want to read serious books, The Elephant Chaser's Daughter is the book to purchase. Get a copy of the book from Amazon store right now and listen to the voice which has come from the bottom of the pile. The remarkable debut will surely put Shilpa Raj on the forefront of the authors who mean business when it comes to writing.

The Shambala Sutras will be beyond mythology... book preview & opinion

Dear readers, Indian novel is evolving and we are seeing many new achievements by novelists day by day. Keeping aside the pseudo-romantic approach by the authors, we are also seeing a wonderful progress in the genre of mythological fiction as well. With the rise of Amish Tripathi, Ashwin Sanghi, Anand Neelakantan... many more Indian novelists are trying their hands (and luck as well) in this genre and some of them are getting true recognition as well. A recent name that has been added on the list of emerging mythological and historical novelists is Aurijit Ganguli, the author of The Shambala Sutras.
Read more