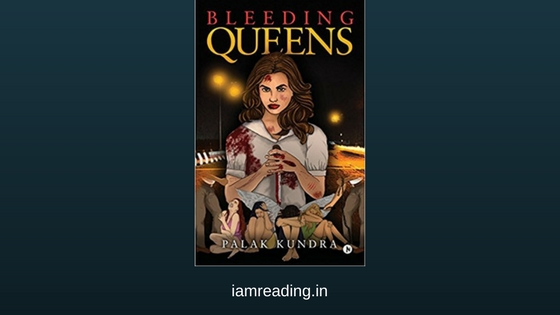 Palak Kundra's Bleeding Queens is a novel which she has written in a rather different way with a rather different kind of heroine named Diljit who does a rather different thing after being mentally and emotionally and physically humiliated by the goons and perverts who rape her, kill her father and thrash her mother. Diljit is courageous and bold; she is decisive and fearless; she is aspiring and tender. Diljit's story in Bleeding Queens could surely be inspiring for all those rape victims out there who put up with their life and let themselves rest in the darker corners of their homes.

Palak Kundra, the author who has spent a big share of her childhood and adult life in Delhi with the roots in Amritsar, Punjab, has done quite obvious things which a critical reader with the 'Marxist theory in literature' inclination could speculate. Her novel is set in Delhi with a family with Punjabi roots. The central figure, as I already let you know, is Diljit who aspires to become an actress in the movies in future. She is doing all she could do to achieve her goal and her family is with her throughout. Her brother Karanveer is a typical Punjabi boy. Another guy who features is Rohit and he loves Diljit.

All looks good, doesn't it? What could a novel be without a twist or a conflict? Palak does it the right way. She has used the theme which is most-written in the modern days whether it's a fiction of a non-fiction job. Nevertheless, Palak's style is different. After being raped, Diljit is surely broken down into tiny pieces of her being but she does not give up on it. Yes, she is encouraged and helped by her brother and lover, but she takes up the fight herself. Unlike the typical 90s bollywood movies, she does not let the lead 'actor' have all the fun and drives the vehicle of revenge and justice home herself!

Palak Kundra's Bleeding Queen teaches us several lessons. The first being that the authors who have the potential for things, do it; and they don't think how the world would react because they believe in their creativity and their skills. Palak Kundra has shown us that an alternative narrative can also work when it comes to rape and injustice and eventually justice. By giving command of things to the heroine, she does not only show a spark of feminism but she also initiates a debate that whether a girl is only to be pitied or she also owns certain shred of existence and existential dilemma. Women empowerment cannot be a thing of table-talks only; it has to come to the world of reality and Palak has done the same with her debut novel Bleeding Queens.

Guys, Bleeding Queens is a novel that every reader with interest in thrill and realism and serious fiction must read. It shows not only the courage of a girl but also the strength and determination of a girl who is broken but comes back to life and lives it on her own terms! You can grab the copy of this book from the Amazon link below:

by a contributor to IMR
#Book_Reviews Literature