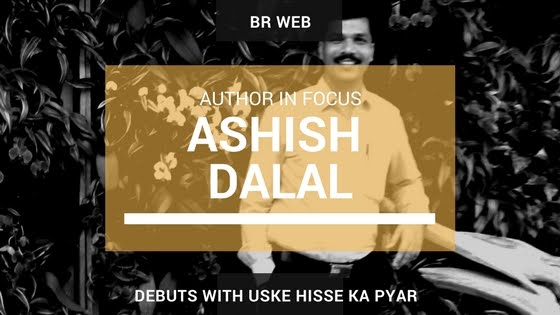 Ashish Dalal, an author from Gujarat, will be making his formal debut in the Indian Hindi Literature with the book Uske Hisse Ka Pyar which is a short story collection by the author. Before this book, Ashish was contributing frequently to the Hindi newspapers and magazines. Ashish Dalal's book will be available for pre-orders on Amazon from 15th of November 2017 and readers can buy his debut short stories collection before the book is formally launched later. We have thought it best in the interest of our regular readers to tell them more about the author because he deserves this light. Ashish is not a usual writer writing Hindi short stories because he thinks different and you can understand this by visiting his official website - http://ashishdalal.in/

His writing goes beyond the usual expectation what we could have with a short story writer who loves writing about various forms of love and also takes an interest in word-painting the intimate moments of life. Ashish Dalal also tries to offer to the readers various other aspects of the life which often confuses us and form a part of the life of almost everyone. For example, look at the following excerpt:

And you can feel the agony and vistas of the dilemma in the lines above. And for the good of the readers, they will also feel a sense of resemblance because of the Hindi language used by the author. Ashish Dalal has done almost the same with every other short story in his book and in each of them, you will find a different aspect of life and relationships being narrated which will offer you great insight and in-depth analysis through the medium of fiction.

Born and raised in Madhya Pradesh, India, Ashish currently lives in Gujarat and works as a manager. However, his interest in literature and his passion for writing make him more a writer and manager only during the working hours. He is well-known among the writing fraternity of his locale and also beyond that. His debut with Uske Hisse Ka Pyar is sure to take him to the new heights of literary production and he will be well-recognised very soon!

Don't forget to order his book when it's available on Amazon for pre-ordering on 15th of November 2017! Happy Reading!
#Authors Feature Story Hindi Indian Fiction