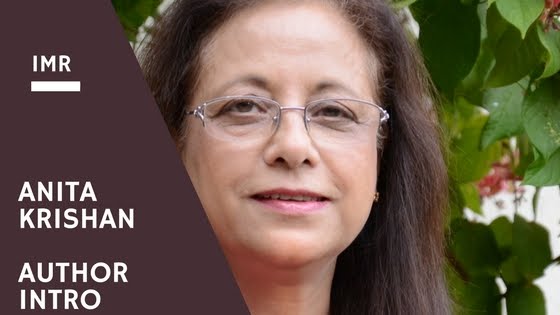 Anita Krishan, since the dawn of her writing career, has been producing meaningful, serious and artful literary fictions which do not only convey the messages very beautifully but also remain fresh in the minds of the readers years after the read. Out of the two ways that she had when she began writing, Anita has chosen the path of literary fiction and decided to go the way not many fiction writers from India have gone. Anita’s works are for the readers with every predicament – for serious readers as well as the casual fiction readers who just read for the entertainment and that’s the reason she is a popular fiction writer today – among the youths as well as among the perpetual readers who have been admiring the authors like Raja Rao and R K Narayan.

Anita’s writing career can be said to begin very recently, almost 10-11 years ago when she published her novel Running Up the Hill in 2007, followed by The Burning Orchard in 2009 and then came the very important one Tears of Jhelum in 2014 which was followed by her recent one, Despite Stolen Dreams in 2017.

Anita Krishan was born in Shimla in 1955 and she spent the early part of her life there – growing up and completing her Masters in English Literature. After her education, Anita started her career as a professor of literature and she went on to become a very helpful one. Her students remember those days even now and they are grateful to Anita for her style of teaching as well as the lessons she has taught them. During her studies as well as her professional career, Anita was writing poems and short stories and has also directed some of the plays. However, she did not venture into the field of writing on a professional level unless she has retired from her teaching profession.

There are many qualities in her writing which make her stand with the likes of Amitav Ghosh. And what I think the best part in Anita’s fiction (though there are many good ones) is her narrative – the language in which she conveys the thoughts of the characters as well as offers us the caveat or the predicament is just wonderful to read! The beauty and the tacit compelling force in her lines are evident even when a casual reading is going on…

Themes and plot construction are also the strength of her novels and her writing. Despite Stolen Dreams unveils to us a world of terror where a terrorist is pondering over his acts and a world of peace where a person intimidated by terrorism is thinking about his relief. Tears of Jhelum is all about the lives of people who are affected by terrorism but do not resort to a haven away from their homeland. Her fiction is visionary and entertaining at the same time. And that’s why many of the best book bloggers in India have praised her writings to a great extent. You can get to read her latest fiction from the link provided below.

Grab your copies from the Amazon link below: