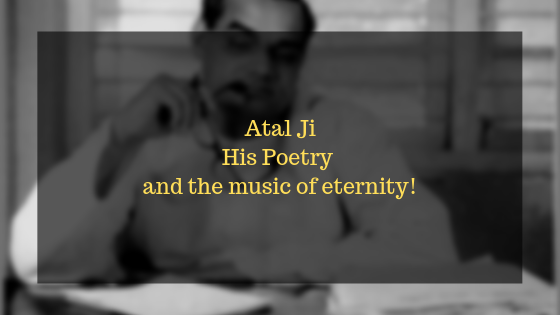 Since my childhood, Atal Bihari Vajpayee has always been one of my favourite poets. Though I have studied English literature as a major subject, my interest in Hindi literature has never been affected by it. I have been reading the poems of Agyeya, Dinkar Ji, Pant, Bachhan Sahab and also Atal Ji. Out of all those I have read, I have been deeply affected mostly by the poems of Atal Ji because his poems have more than words. Believe me; poems by Vajpayee Ji have more than mere words in them. His poems can communicate to you the emotions, the valour and also the motivation in a literal sense. Today, I will share my thoughts about his poems and also share the links to some of his best poetry collections on Amazon India website.

Just read these lines and you will instantly feel the motivation surging like a positive charge dying to get away from the darkness and defeat the troubles on the way to success. Only a poet of valour, a poet of eternal periods and a poet of invincible imagination can dare to write on the forehead of time - in a way, challenging the established notion that time is the most powerful entity! And this is the one reason that makes Atal Ji a very brave poet with guts.

And these lines are enough to compel people into pondering. Why do we have to act like humans all the time? Jealousy, greed, lust... can we ever try to get above these petty thoughts and see for ourselves how beautiful life becomes? Atal Ji clearly sends bigger messages in his smaller lines. For once, just see yourself getting rid of the petty human weaknesses and you will feel a change within you. Start helping others; see beautiful things around you; don't be jealous of your friends' success and you will be loved - you will reach higher in your life. A message of all the emotions, Atal Ji's poem that touched me the most was Amar Aag Hai. In that poem, a vir rasa poem, he lists all the possible identifications of India - India that is Bharat - Bharat that is the Bharat of Ram and Krishna, Arjuna and Bhima, Hanuman and Strength...

There are many things that one can say about the poems of Atal Ji, his poetry as a whole and the art that will be eternal, even after the sad demise of our beloved poet! I will encourage the readers to get copies of the following collection of poems by Atal Bihari Vajpayee Ji to enjoy the best of his poems: