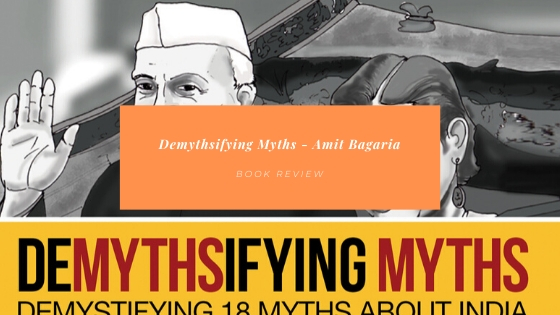 How old is India as a country? Is it right to call Gandhi a Mahatma? How many political assassinations happened in India? Who involved in all those murders? How many affairs did Indira Gandhi have? What was the character of Nehru? What was India like in the emergency era imposed by Indira Gandhi? How many scams, and on what scales, we saw during the two recent UPA tenures and before? How many do we know? What was the secret of Feroze Ghandy becoming Gandhi? Do you know all these or any of these? If your answer to any (or many or all) of the questions is (are) now then you must read a book entitled Demythsifying Myths: Demystifying 18 Myths about India. This is an interesting non-fiction book that is written by Amit Bagaria and the book communicates some secrets and exposes some of the lies.

Many book reviewers in India have written about this book on the leading book review websites in India. They have mostly appreciated the purpose of Amit’s book and it is indeed praiseworthy. While the distorians are mostly busy in propagating their own narratives and theories, the author here has taken them own and countered the fractured and half-baked truths very vehemently.

A book with 205 pages and 18 chapters will certainly change your views about many things you have accepted (with a cool head) as the truths told to you by your parents, teachers, and professors without verifying their validity. This is why Amit Bagaria has written this book. The author believes that there are many myths in India, told to the kids as they grow, that need to be unfolded, unmasked and exposed. He narrates the weird celibacy experiments that Mahatma Gandhi used to go through by sleeping naked with his female pupils and even relatives. This book enters a very complex romantic life of Indira Gandhi and unfolds her exceptional craving for physical and emotional love - an ever-unknown side of the iron-lady who imposed an emergency upon her own people to suppress their freedom of expression.

Demythsifying Myths attacks the Congress party of India for its misgovernance and well-planned atrocities that it carried on the poor people of India. We only know about the scams like 2G and Coal-Block distribution scam but Amit Bagaria exposes the scams like National Herald Scam, CWG Scam, Gold Import Scam and many others. He also takes on the people who believe that all Hindu Gods are vegetarians. He cites data and shows that Indians have been non-vegetarian and Gods, in their human form, like Ram and Krishna, were non-vegetarians because we have proofs likewise. He also tries to make the readers understand that Hinduism, largely, is a way of life rather than being a religion like most other religions are - having a singleton caricature of life.

I am certain that this book will serve a very good purpose by educating our youths some truths and some lies that they have been served since their very childhood. Amit Bagaria has written a timely book and it should be read widely. I liked the way he has narrated his side. I also commend the way Amit has used his persuasive prowess to prove his points without very much of intellectual dichotomy that unnecessarily draws the statements at length and misses the core purposes in a book. This is an ideal book for the readers at large - the readers who want to know about the real India - in its blacks and whites.