What does Shobhaa De mean today for modern romantic novelists? 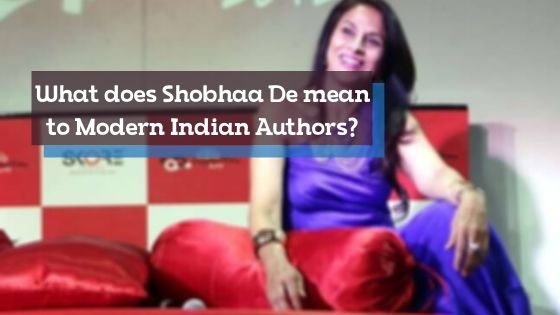 Should I say these authors writing sizzling soft-porn novels romantic at all? An author who documents nights spent in hotel rooms detailing the act of intercourse in explicit style should not be called romantic at all. Romantic, by all means, were the novels by Jane Austen or Charlotte Bronte or even Thomas Hardy. However, any day, I will not call the works by modern Indian authors sold in bunches romantic novels. These novels are, at their best, pornography in text that cannot be banned. The original idea or the original sin was germinated by Shobhaa De, the novelist who took down fiction from its high horse to the lower strata of society in terms of readership, maintaining the protagonists from the same high class. However, Shobhaa was clear about her idea and about her writings. She did not try to qualify her works as romantic novels – she was and is candid enough in telling others what she means.

On the other hand, authors like Durjoy Datta and Savi Sharma like to be called romantic novelists while their work exhibit nothing in terms of romance. Nudity and obscenity cannot be termed romance. They don't understand this basic difference. Nevertheless, it doesn't seem to impact their sales, reputation and rapport with the publishers. Established publishers like Penguin Random House and Harper Collins are busy in publishing the literature with no standard and taking pride in it. Why? They all know that if they have to remain in the market, they have to publish the literature that sells rather than publishing the literature that maybe aesthetic as much as it may but cannot sell in the actual market. Well, no body is to be blamed here!

Going back to Shobhaa De days, she published her novels with a clear intention. She wanted the readers to know that the women in higher strata of the society also want to act and behave like women in middle and lower middle and even in the lower classes. They also want to indulge themselves in collective recreational activities and also, the most highlighted thing, in relationships outside the marriage. However, in doing so, Shobhaa indirectly or even directly attacked the women of the middle and lower middle class in India. Was it deliberate? May be!

I am not going to judge Shobhaa as a novelist today. I am just trying to make a point that Shobhaa's published works were much better in content and ideas compared to what we get to read today in the name of romantic novels. The authors of the day are not very clear in terms of their objective. They just want to sell their books to the readers, mostly teenagers and school going youths. Shobhaa De, on the other hand, wanted to establish a narrative and she succeeded. Though her themes were also very limited and her plot were just reworking of the previous plots she worked on, her writing sustained the ideas she wanted the readers to know, ponder and debate.
#Authors Indian English Fiction Indian Fiction Indian Literature Opinion Writers